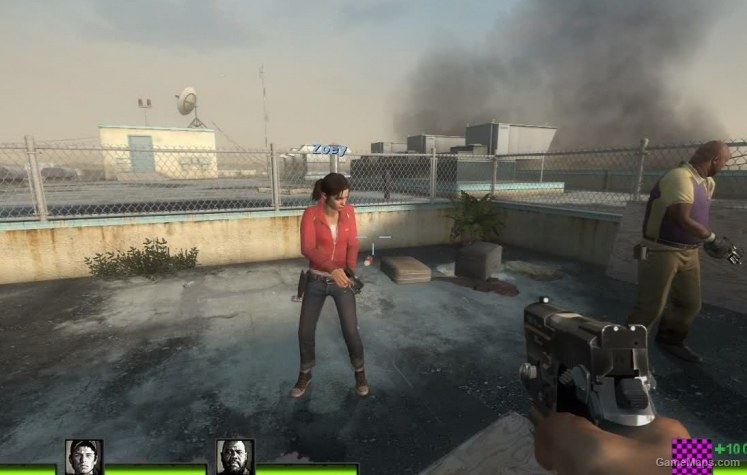 Delete Review
Hands Down <3
By ZoeysDarling July 2018
WAITING FOR UPDATE <3 <3 AND THE FINAL VERSION <3 <3
Great Zoey Soundpack
By FreeCell May 2017
PROS Near perfect sound pack CONS There are strange glitches in some of the sounds.
By mauro9523 April 2014
Pros
-It works well.
Cons
-I do not see a counter for now.
This is great because you could not add voice to rochelle zoey in replacement, but good.
By Soro_Hanosh June 2012
Pros
-It works as posted -I hate Rochelle's voice, thanks.
Cons
-A little too much effort went into this. In the passing she does state the new survivors names, but you made a mish-mosh of her other lines to say things like "eeLliS" or "mEeLE Weapons here!" you could have ported her normal lines from the dlc's -Still Rochelle when talking about the magnum
All in all I love this mod, always have it on. Could be better though
By Leggs May 2012
Pros
-Hey, it's Zoey! :) -A lot of effort went into this -Much easier than editing voice manually -Voice is nice for characters other than Zoey
Cons
-Harsh, loud static sometimes -Very strange "monster" sounds too -Some phrases are cut short ("Watch Ou-!") -Sometimes will mention L4D1 Survivors (in non-L4D1 campaigns) -Cannot say Nick or Coach
I like using this mod when I have on either a Zoey skin or another character, such as Claire Redfield. I feel like her voice can be fitting for multiple characters, unlike Rochelle who has a lot more, let's say "personality". I can tell a lot of work and being clever went into making this mod. Things like chopping words apart and adding phrases together to create new phrases like "Shocker", "Jockey", "Shot here" etc. are all well done to the extent that they could be. I'm not sure the date this was uploaded but it seems as though it was before many of the L4D1 campaigns were added to L4D2. That being said, I think a remake of this has great potential being that there now should be more L4D1 Survivor voice clips to work with, probably making it a lot easier. Also a chance to get rid of that static and all of those strange sounds. Although aside from being in a Zoey pack for whatever reason... some of those "monster growls" are actually legitimately creepy and really cool. If you could manage to get them isolated you could probably make some awesome monster sound packs!
Back to all feedback
Show more reviews (5/7)