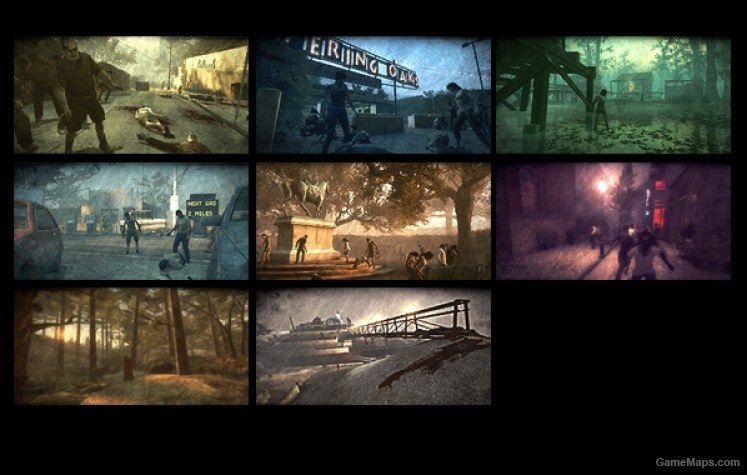 Delete Review
By SilverFang53 July 2013
Pros
+ Gives the Preview of the campaign map a much more dynamic feeling and look. + The Colour Code for the campaign maps' previews matches with that map's environment perfectly. I.e. The Passing previews matches with the purple colour and more. + A much better replacement than their Default counterparts.
Cons
- There are no Main Menu Previews for the L4D1 campaign maps. (-0) - Personal: The campaign preview for Cold Stream for the main menu has been reverted back into its old Default state, and the preview for Map 3 of Cold Stream has been replaced with its Main Menu version instead of showing the preview of Map 3. (-0.5)
All and all, this is a definite recommended download for those who want to replace that dull, bland, and rather non-eye candy of a Default Map Previews that Valve provided us with. Though it is not just the Main Menu Previews for the campaign maps have been changed, it also changes the previews for the maps of that campaign too! HOWEVER, ever since the Beta version of L4D2 has been 'out of the Beta' on the July 2nd Update, plus doing a comparison between the in-game previews and your previews shown on DeviantART (yes, I have this under my Favourites on that site), the Main Menu Preview has been reverted back into its old Default state and the Preview for Map 3 is currently using the Main Menu Preview instead of its Map 3 Preview. I may be the one out of the many here for this con, but it could be a personal issue than an update issue. I may never know about it unless there is some form of confirmation(s) from other players about this.
Reply
By Left4Megaton March 2013
Pros
I downloaded it and i dont know, it looks sooo much better than the default ones. Eranthis you are just awesome. Thanks for stuff like that!
Cons
- None
Just great, nothing to say. Download it!
Reply
By jman1015 December 2012
Pros
+Very nice previews +Better than originals in my opinion
Cons
-Unforinatly no previews for the l4d1 campaigns
This is GREAT just make some for the l4d1 campaigns and it will be perfect!
Reply
By miztaegg August 2012
Pros
- Campaign titles with headlines plus concept art for the previews, good thinking. - Good use of different color tones for specific campaigns, which matches the themes very well. - Torn effects overlay.
Cons
- None.
Eranthis you are one talented artist, you have my downloaded!
Reply
By runningwild09 July 2012
Pros
Very nice add It makes it look much better
Cons
None
Simple, yet amazing work. If you could so similair ones for the l4d1 maps, then that would be great.
Reply
Back to all feedback
Show more reviews (5/8)